US American Soldiers travel to Poland for pilgrimage to Jasna Gora

US American Soldiers travel to Poland for pilgrimage to Jasna Gora 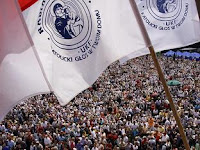 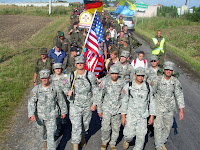 Six Soldiers and two Airmen walked 137 miles, beginning in Warsaw and ending in Czestochowa, in 10 days for the annual Polish pilgrimage. They walked with a group of about 300 people that included Polish, German and Slovakian Soldiers.

Every year, thousands of Catholics from around the world go to Poland to participate in the ceremonial walk to Jasna Gora monastery in Czestochowa, the site of the revered Black Madonna icon.

Their journey began with an early morning mass at the field cathedral of the Polish Army. Every day, the group attended Mass regardless of their various faiths and beliefs.

During the 12-hour walk each day, they were treated with prayers, songs and sermons in German, Polish, Italian and English broadcasted through large speakers carried by participants.

Local residents provided pilgrimage participants with food, refreshments and encouragement along the route. Every night, the Illinois Guardsmen slept in tents provided by the Polish Armed Forces.

“I was told numerous times by Polish Soldiers that they got a kick out of the fact that the German Soldiers and American Soldiers were communicating to each other through their Polish translators,” said Sgt. David Sworobowicz.

Local farmers stood along the route and handed out their fruit and vegetables to everyone walking in the pilgrimage. The cities also worked together to offer soups and bread for lunch everyday. The other breaks they had throughout the day were at numerous churches.

“The civilians’ generosity along the way is unmatched,” said 2nd Lt. Veronica Kool, of Springfield, Illinois Army National Guard. “All along the route, the Polish stood waiting outside their homes offering whatever food they had to give.”

“The religious experience gained from this exercise is above and beyond rewarding,” said Sworobowicz. “I can only hope to do it again sometime.”

The trip ended at Jasna Gora monastery in Czestochowa with the military pilgrimage walking the last half mile or so through thousands of supportive spectators that waved, shook their hands, gave hugs and took pictures of the group.

“It is not every day that you get to travel overseas for a friendly noncombative operation,” said 1st Lt. Jeremy Dugena. “From the arrival in Poland, the Polish Army were incredible hosts making sure we had everything we needed.”

Illinois Guardsmen participated in the pilgrimage to commemorate the 1655 Polish victory over Sweden and to build a stronger relationship with the Polish.

The SPP links National Guard states and territories with their partner countries to foster mutual interests and establishing long-term relationships across all levels of society.
Through the SPP, Illinois Army and Air National Guard service members have participated in annual, joint training exchanges with military forces of the republic of Poland.

“Their professionalism and maturity are what I desire in every group of Guardsmen who come to Poland,” said Maj. James Fisher, the bilateral affairs officer for the U.S. Embassy in Warsaw. “They promoted the State Partnership Program with flying colors and are model diplomats of our country.”
POLAND AGAIN REFUSED
VISA WAIVER STATUS

"As you may know, today a ceremony took place in the White House Rose Garden, during which President Bush announced that seven countries - Czech Republic, Slovakia, Hungary, Latvia, Lithuania, Estonia and South Korea – met the requirements to join the Visa Waiver Program.

"Poland was not included as one of the favored nations.

"I am certain that you are well aware of the great significance the inclusion of Poland in the Visa Waiver Program would have to one of this country’s most steadfast allies.

"However, Poland is still yet to be included as, according to the most recent statistics, the refusal rate in Poland is three points too high.

"There is no need to reiterate all of the facts that show how Poland has been for years one of the most reliable and consistent allies of the United States in many arenas, as well as the fact that Poland not only does not pose any kind of terrorist threat, but has done a lot to combat this international menace. I am certain that you already know all of those arguments.

"However, I would like to emphasize another, perhaps less known aspect of the situation, namely the great loss of good will today’s continued exclusion means to many people of Poland towards the United States of America.

"I have been repeatedly hearing how feelings of excitement and support towards our great country have been over the course of the last two years turning into those of disappointment and bitterness.

"Furthermore, and more worrisome, I have been hearing that many members of the 10 million strong Polish American Community (Polonia) are starting to hold similar feelings.

"In these turbulent times, the United States has to cultivate and cherish its relationships with most faithful allies. Poland is definitely among those nations. It is time, in fact it is now much past due, to show Poland that its support and contributions are valued by the United States, and not with sweet words, but with concrete actions.

"As the President of the Polish American Congress, one of the oldest-and the largest-Polish ethnic organization in the United States, I urge you, either as the next president of our great nation or on the Senate floor, to do what the previous administration has been promising Poland and Polonia for years but have never delivered – make sure that Poland joins the privileged ranks of the visa free travel as soon as possible."

A similar letter was sent to President George W. Bush, who has been promising the visa waiver for Polish citizens for years, but, despite praising Poland as an ally, has not delivered on the promise.

Obama has said that he would invite Poland to join the Visa Waiver Program. A campaign release stated, "Today’s visa regime with Poland reflects neither the current strategic relationship nor the close historic bond between our peoples … In particular, this means expanding the program to countries, like Poland, that have demonstrated a capacity and willingness to cooperate with the U.S. in achieving counterterrorism goals."

McCain has been silent on the subject during his campaign for the presidency and reportedly agrees with the current Bush policy on visa waivers.

WARSAW, Poland (AP) — Hundreds of soldiers in camouflage set off Tuesday on a 10-day march to Poland's holiest Roman Catholic shrine — among them five Americans hoping to deepen ties with an ally.

Five members of the Illinois National Guard traveled to Poland to make the 180-mile (290-kilometer) trek on foot — alongside Poles, Germans and other Europeans — from Warsaw to Czestochowa, site of the revered Black Madonna icon.

Though the 300-year-old pilgrimage has deep religious and patriotic resonance in mainly Catholic Poland, the main purpose of the U.S. contingent, a tradition that has started in recent years, is to show solidarity with Poland — an ally in Iraq and Afghanistan — and other nations.

It's a chance "to come together and share a little bit, and hopefully develop closer bonds with foreign militaries in a non-combat type setting," said Master Sgt. Roman Waldron, 37, from Springfield, Illinois.

Before embarking on the pilgrimage, the pilgrims attended an early morning Mass at the Field Cathedral of the Polish Army, where a priest blessed them with holy water. They were also told to set a moral example and refrain from drinking or smoking during the march.

The Black Madonna — which legend says was painted by St. Luke — was brought to the Jasna Gora monastery in Czestochowa in 1384.

Many miracles have been attributed to the painting, including a 1655 siege during which 70 monks and 180 supporters held off nearly 4,000 soldiers from the Protestant Swedish army and inspired Poles to rise up and throw out the invaders.

Sgt. 1st Class Evan Young, from Rock Island, Illinois, believes the pilgrimage is going to be even more meaningful than he had first imagined.

"Originally when I was given the opportunity I thought it would be kind of a neat way to see Poland, but then I started doing research on the Black Madonna and the siege and I thought it's part of a much bigger thing," said Young, a 45-year-old who grew up Episcopalian.

"It's pretty neat to be taking part in this, and help improve relations with Poland and other countries that are here," he said.

Only one of the five American soldiers is a Catholic. They will sleep in eight-man tents set up along the route by the Polish army.

The soldiers were trailed by thousands of students and other pilgrims in Warsaw, and will eventually join up with thousands more expected to converge on Czestochowa next week, ahead of the August 15 Catholic holy day marking the Assumption of Mary.

"This builds brotherhood among soldiers from different countries," he said.
Posted by Unknown at 12:17 PM