UN soldier in Lebanon trades her blue beret for a veil

UN soldier in Lebanon trades her blue beret for a veil 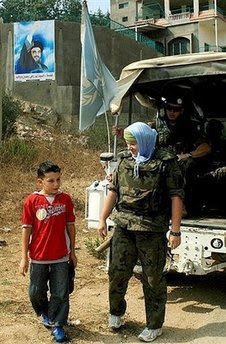 MARJAYOUN, Lebanon (AFP) -- Sylvia Monika Wyszomirska is a Catholic from Poland, but in an effort to integrate better into south Lebanon's conservative society she has traded her UN peacekeeper's beret for a headscarf during the Muslim holy month of Ramadan.


""Out of respect for the environment I work in, I feel I need to try to integrate myself"" during Ramadan, said 37-year-old Wyszomirska who has been stationed in the country for four months.

""And since my contingent is deployed in a Muslim area, I have decided to wear the hijab,"" the Muslim veil, over military fatigues, the mother of a little girl told AFP.

Wyszomirska chose a veil in the same light shade of blue used for the berets worn by members of the 13,000-strong United Nations Interim Force in Lebanon (UNIFIL), which keeps the peace along the tense Lebanon-Israel border.

A native of Krakow, Wyszomirska works as a translator for the 200-member Polish contingent of UNIFIL, and her job brings her into direct contact with the people who live in Shiite-majority villages across the Marjayoun region.

Her deployment to southern Lebanon is not Wyszomirska's first encounter with Muslim tradition. She has also been to Kuwait and Iraq and worked in Syria as well to perfect her Arabic.

""When I was studying Middle Eastern languages at Jagiellonski university back home we also learned about the customs, traditions, history and geography of the countries we might end up working in -- places like Lebanon, Iraq, Syria and Kuwait,"" she said.

Wyszomirska's decision to wear the veil during Ramadan has helped to break the ice with local villagers, both for her personally and for her colleagues in the Polish contingent.

""At first relations were lukewarm, especially since we don't come from a rich country with things to offer the people,"" she said. ""All we can offer them is respect and a smile. But since I started wearing the veil, people have been more welcoming with me and also with my colleagues. This has opened more doors and opportunities to strike up friendships.”

""They began inviting us into their homes for coffee or sweets. And when we pass by the children smile and wave at us,"" she said.

""Today I feel almost as if I have a second family in Debbine, Blat and Arid,"" she added of the mostly Shiite villages in the area.

Wyszomirska said that wearing the veil was ""a gesture from the heart -- it was not imposed on me.""

Her superior welcomed the idea that she wear veil during the holy month.

""He also suggested to me that I explain Ramadan customs to the other soldiers so they can respect the traditions and refrain from eating and drinking in public during fasting"" between dawn and dusk, she said.

Another woman peacekeeper in the Polish contingent, a 36-year-old, said she thought ""wearing the veil was a smart move, because it brought us closer to the residents,"" but also added that she would not do the same herself.

""It would change my look completely, and that's not something I want.""

Some of the villagers were slightly taken aback by the sight of the fatigues-clad Wyszomirska wearing a veil.

""I was surprised to see Sylvia wearing the headscarf, because I know she's not a Muslim,"" said Zahraa Hijazi, a veiled student from the village of Debbine.

""But in any case nuns wear veils even though they are Christian,"" she added.

Debbine mayor Mohammed Sherif Ibrahim agreed that many of his constituents were surprised by Wyszomirska's decision to wear the veil ""because it is out of the ordinary"".

""But it is also a nice gesture that breaks down barriers between UNIFIL and the local people,"" he said.
Posted by Unknown at 4:41 AM